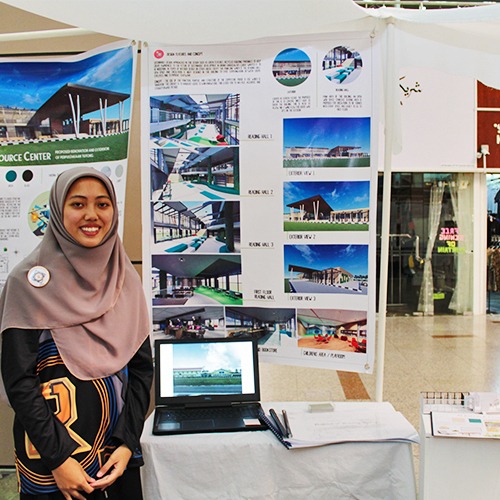 We conducted an interview with some of the participants, one of them was Siti Nurbayah @ Adilah binti Haji Saiful Bahri, a final year student taking Diploma in Interior Design.

My project is a proposal on the renovation and extension of the only library in Tutong District. I decided to rename the place and call it “Tutong Resource Center”, because a library mostly acts as a traditional resource center. I thought that it’s original name - “Perpustakaan Daerah Tutong” - sounds a bit too formal, and every other district’s library also has a similar name. Since it’s the 21st century, I thought that giving it a fresh new name would get people interested to come to the place.

﻿"Perpustakaan Daerah Tutong" ﻿after being renovated into "Tutong Resource Center"

Why did you decide to renovate the Tutong District Library? 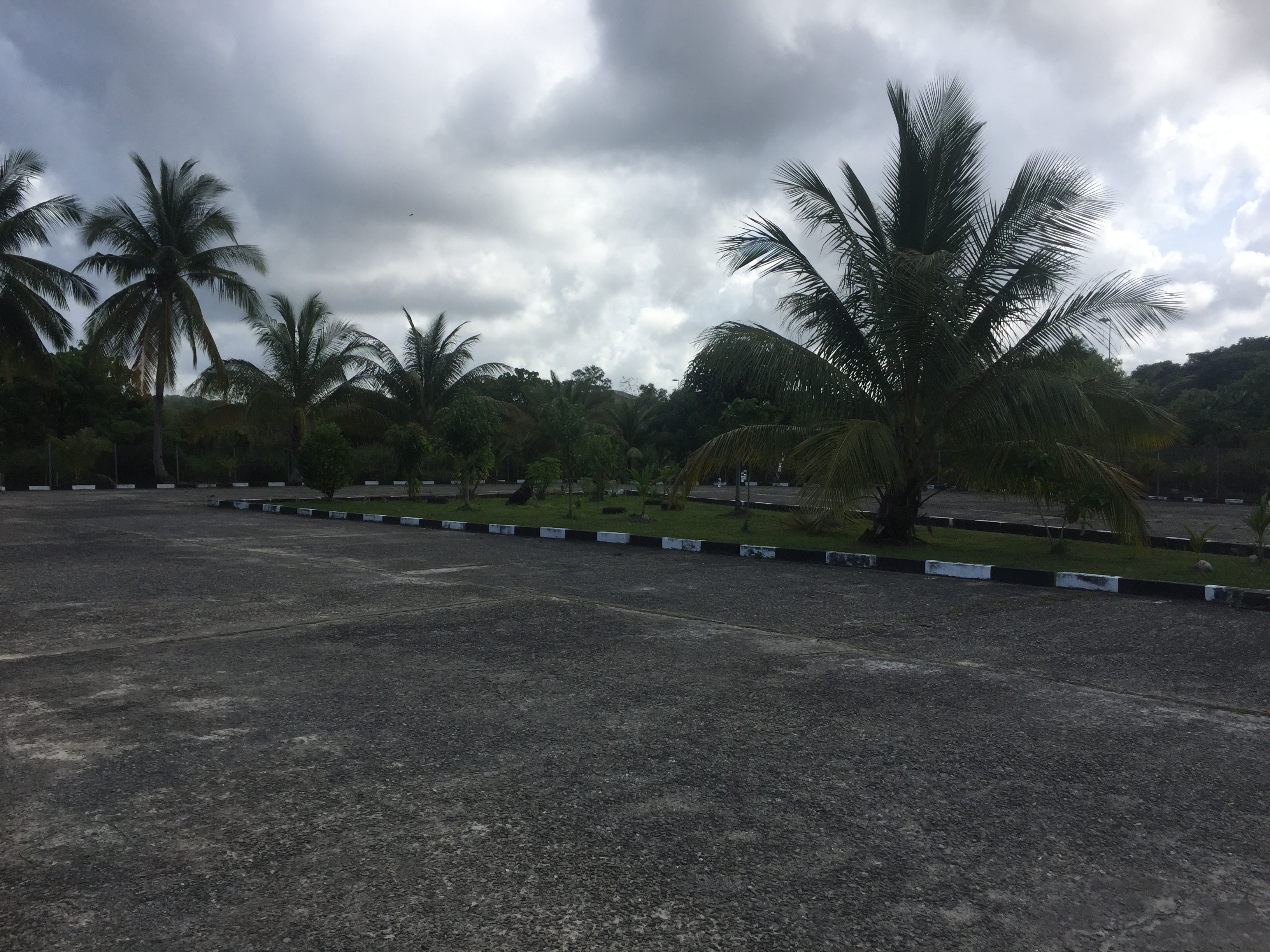 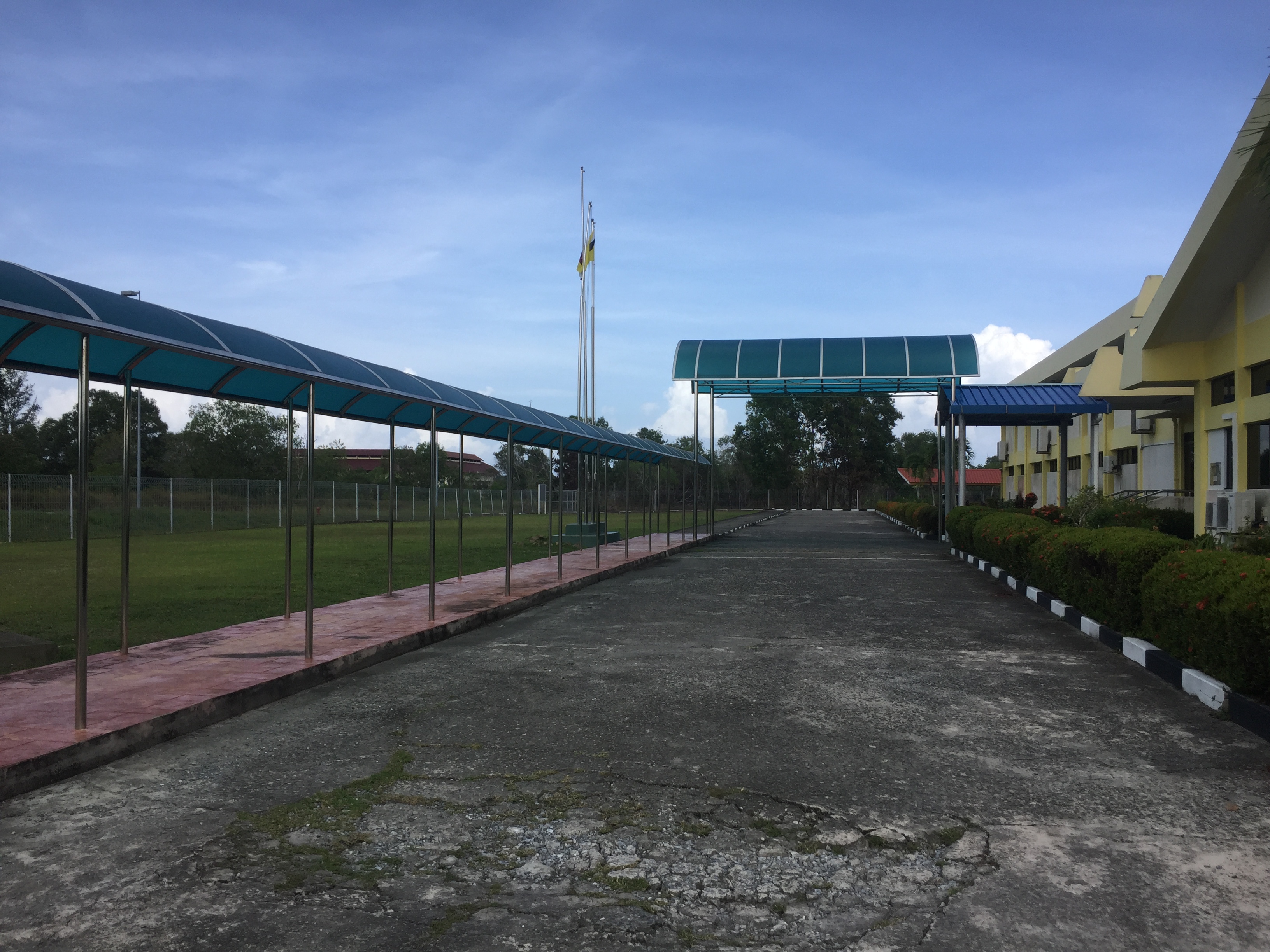 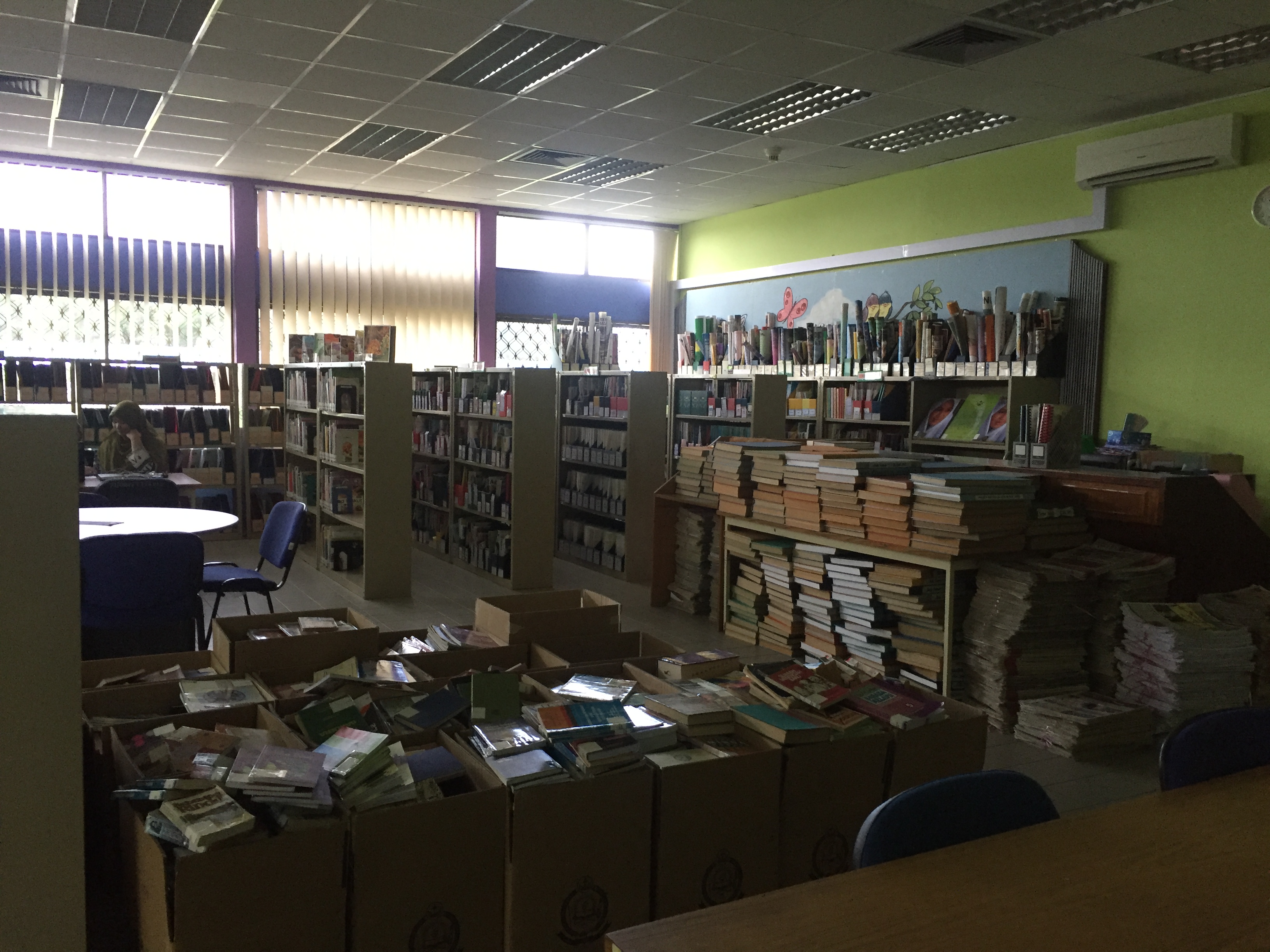 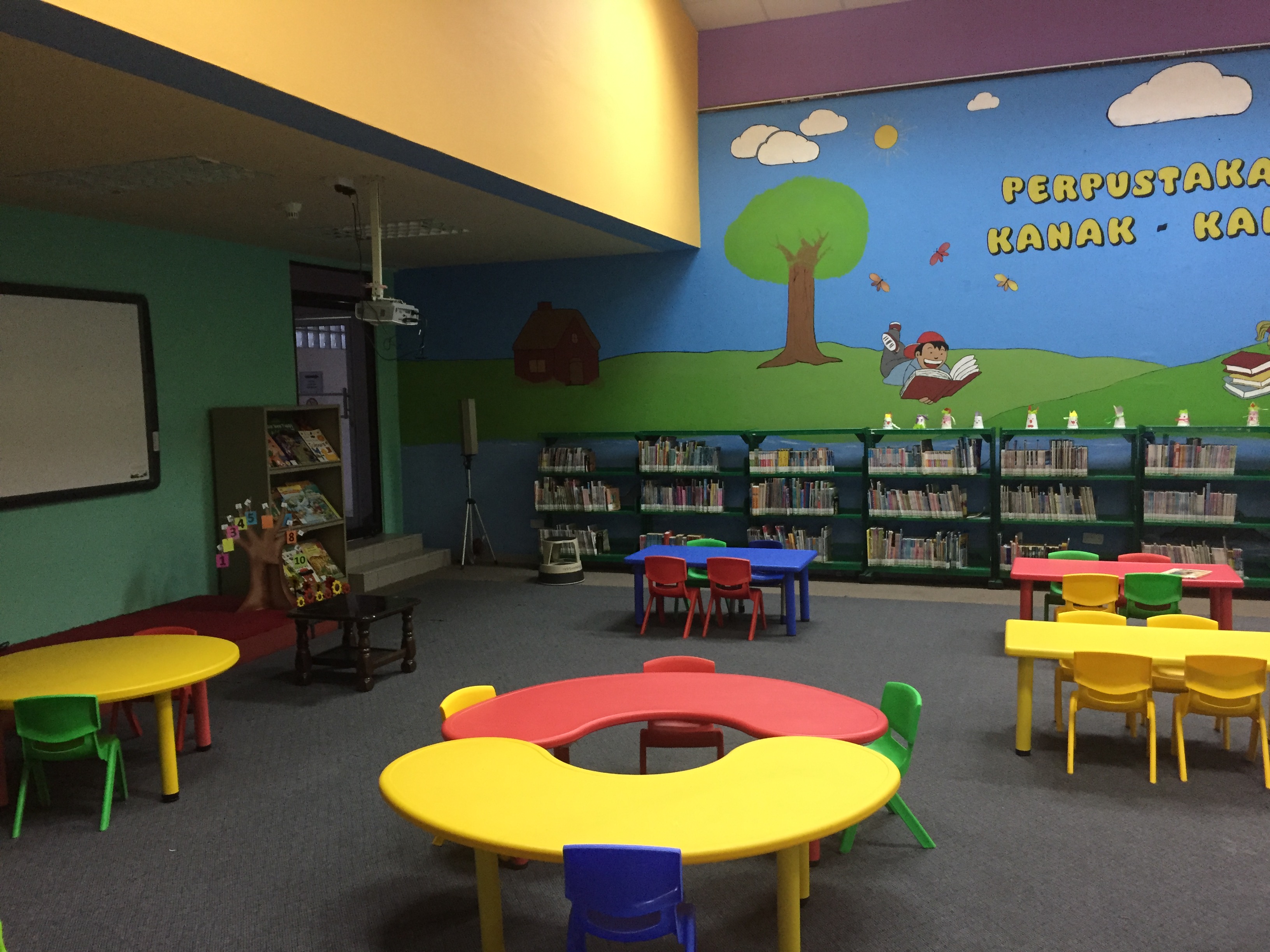 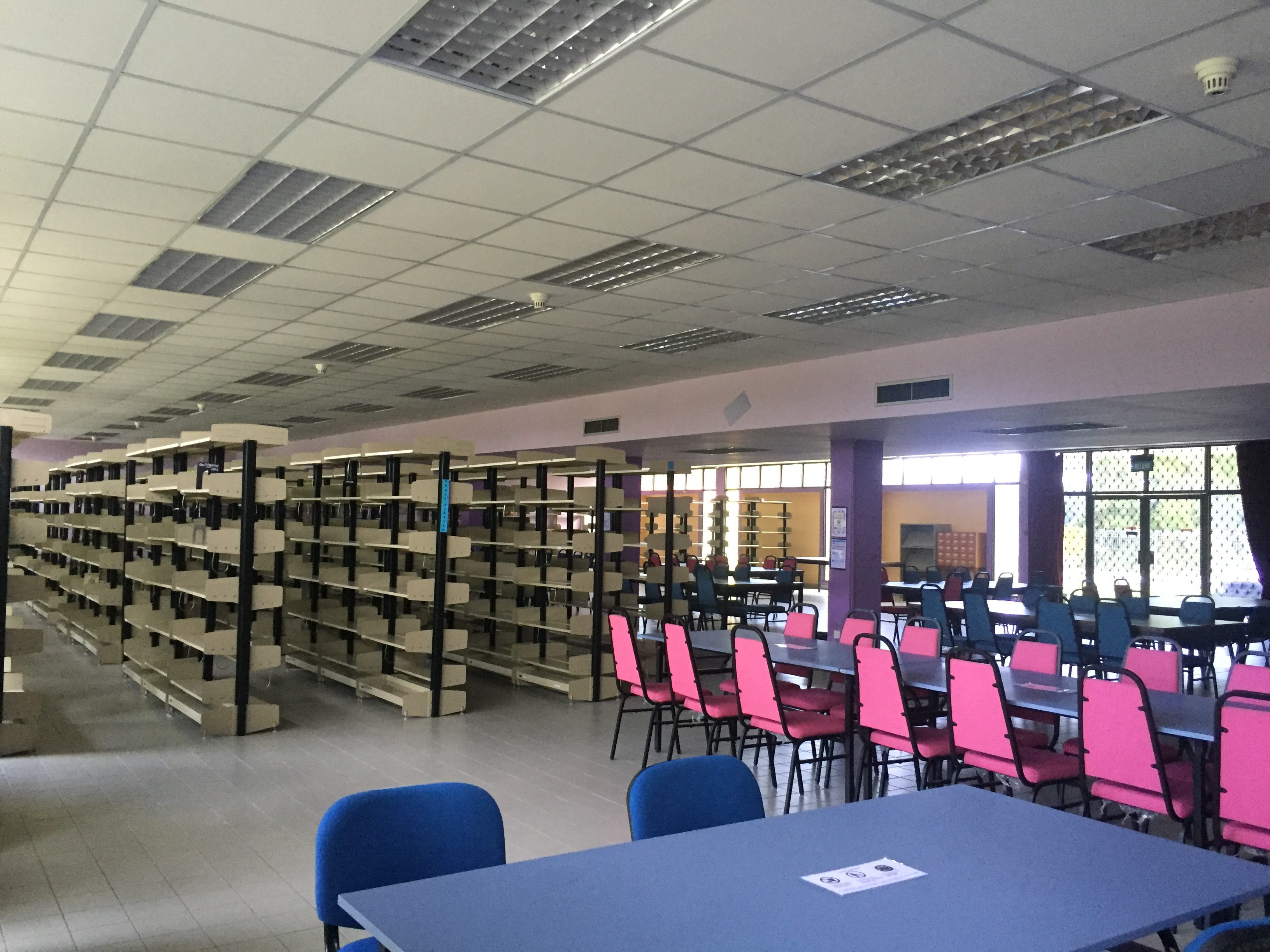 ﻿The interiors and surroundings of "Perpustakaan Daerah Tutong"﻿

I chose the area because I thought that it’s environment is rather dull. When I came there, I was the only visitor - even the parking lot was empty! Most of the interiors, including the children’s area, looked boring, and the largest area of the library was unoccupied and unused. So I really wanted to make a difference by reviving the place.

I also decided to choose a site in Tutong because most of my friends went for sites in Bandar areas for their projects. And the people of Tutong usually go to Bandar to do their research. So I thought of making this place look livelier, so that more people would want to come to this district.

What inspired your design for the renovation?

I was mostly focused on catering to my client’s request. We all get to choose and find our own clients. My client is basically buying the concept for my proposal, but the design for this library will be modified and used for her own company building. 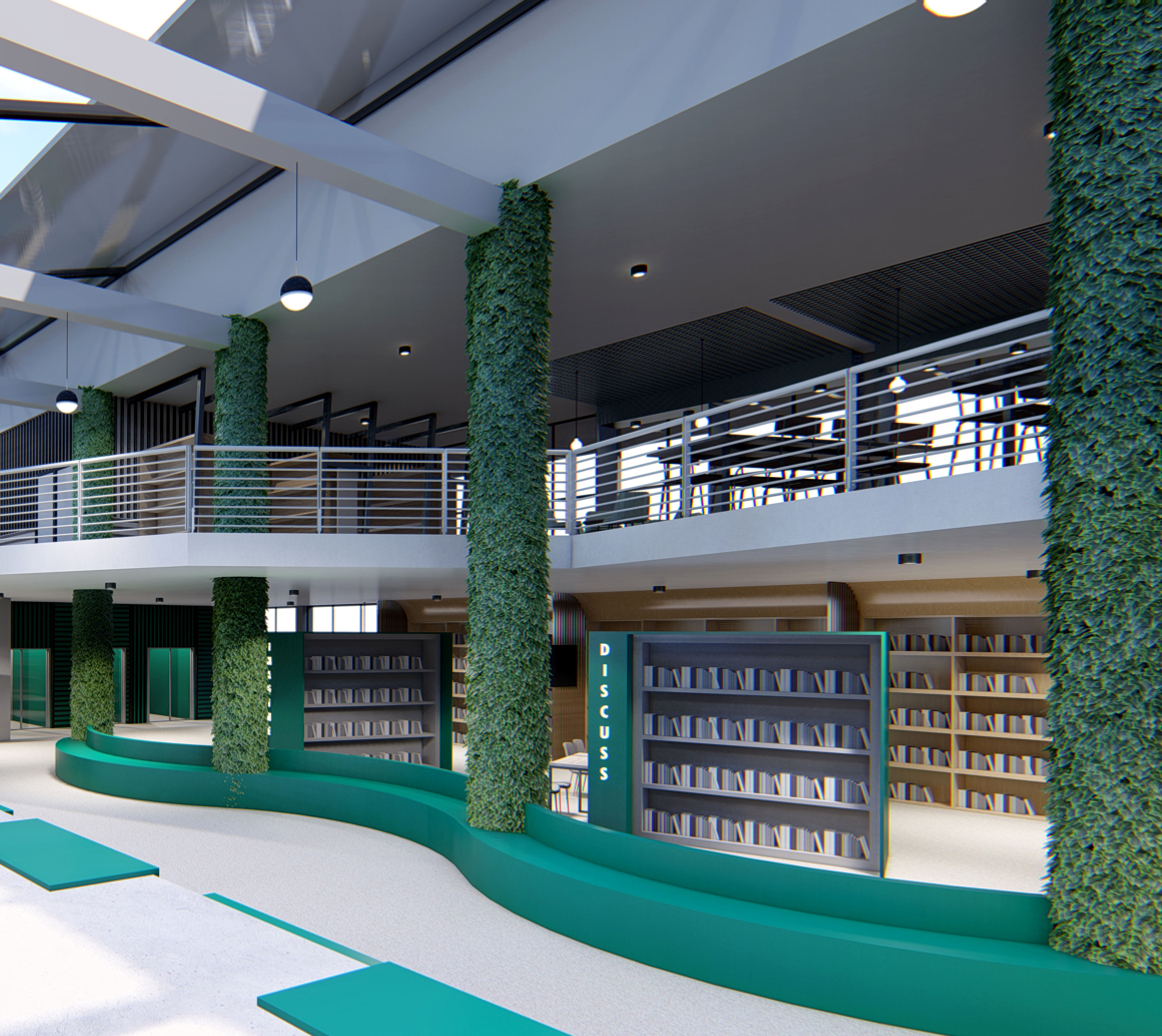 My client liked the idea of nature and she wanted to make it lively, so I thought of giving the building natural colours, as you can see from the greens. I used natural greeneries here because it will help cool down the place and provide natural ventilation. But there is also an industrial concept to my design as well. Hence, the darker colours such as black.

﻿Besides the use of large-scale windows for natural lighting, ﻿dark, steel colours were also incorporated into the design to give out an industrial environment﻿

My client also wanted a simple and minimalist design that’s also sustainable. So I created a design that allows for natural lighting. Currently, the existing library is very dark and dull. But I also added some shade along the window areas, because light would hit the building during the morning and afternoon, and it could get really hot. So the shade will control the direct sunlight as it enters the building. 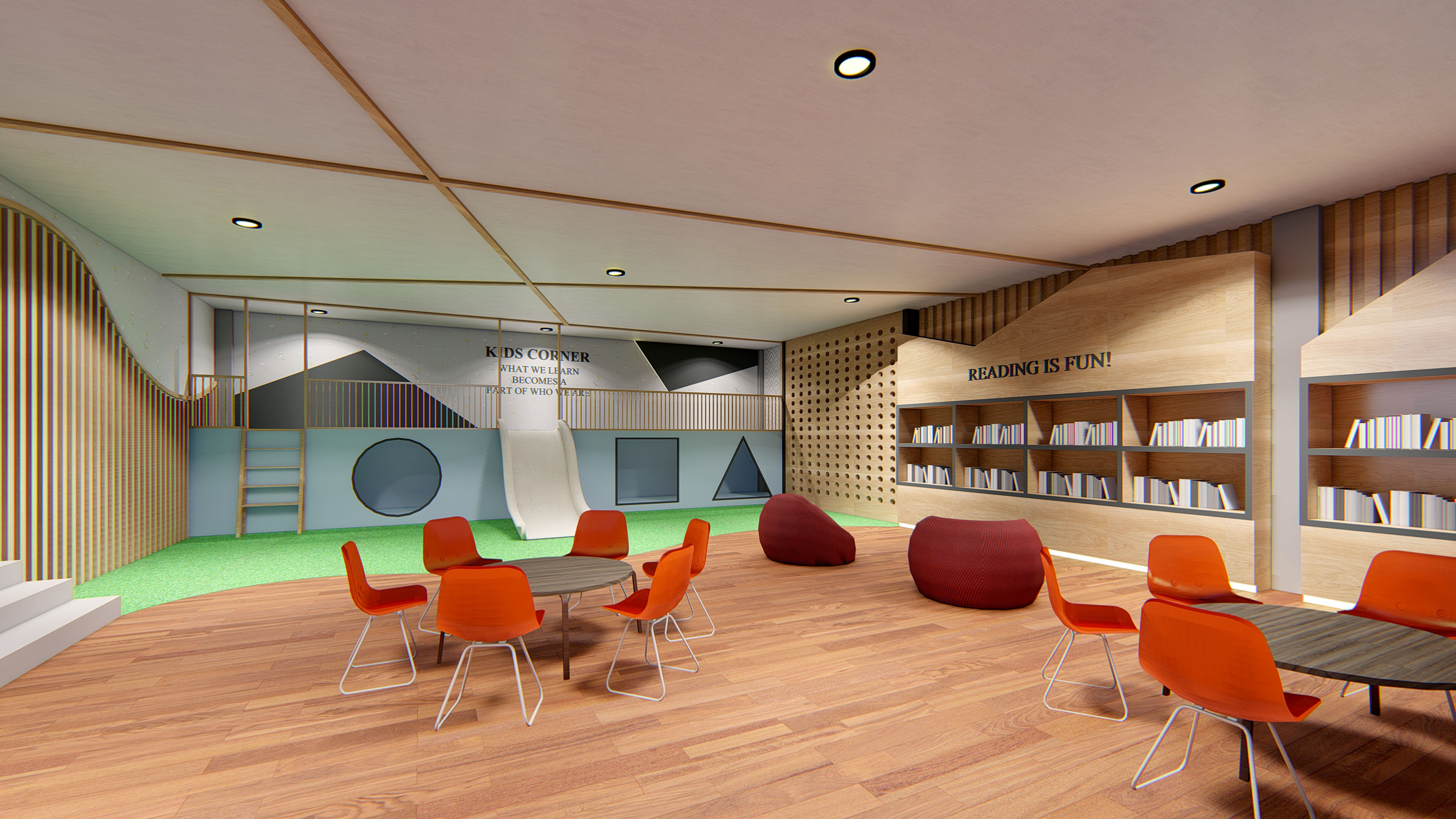 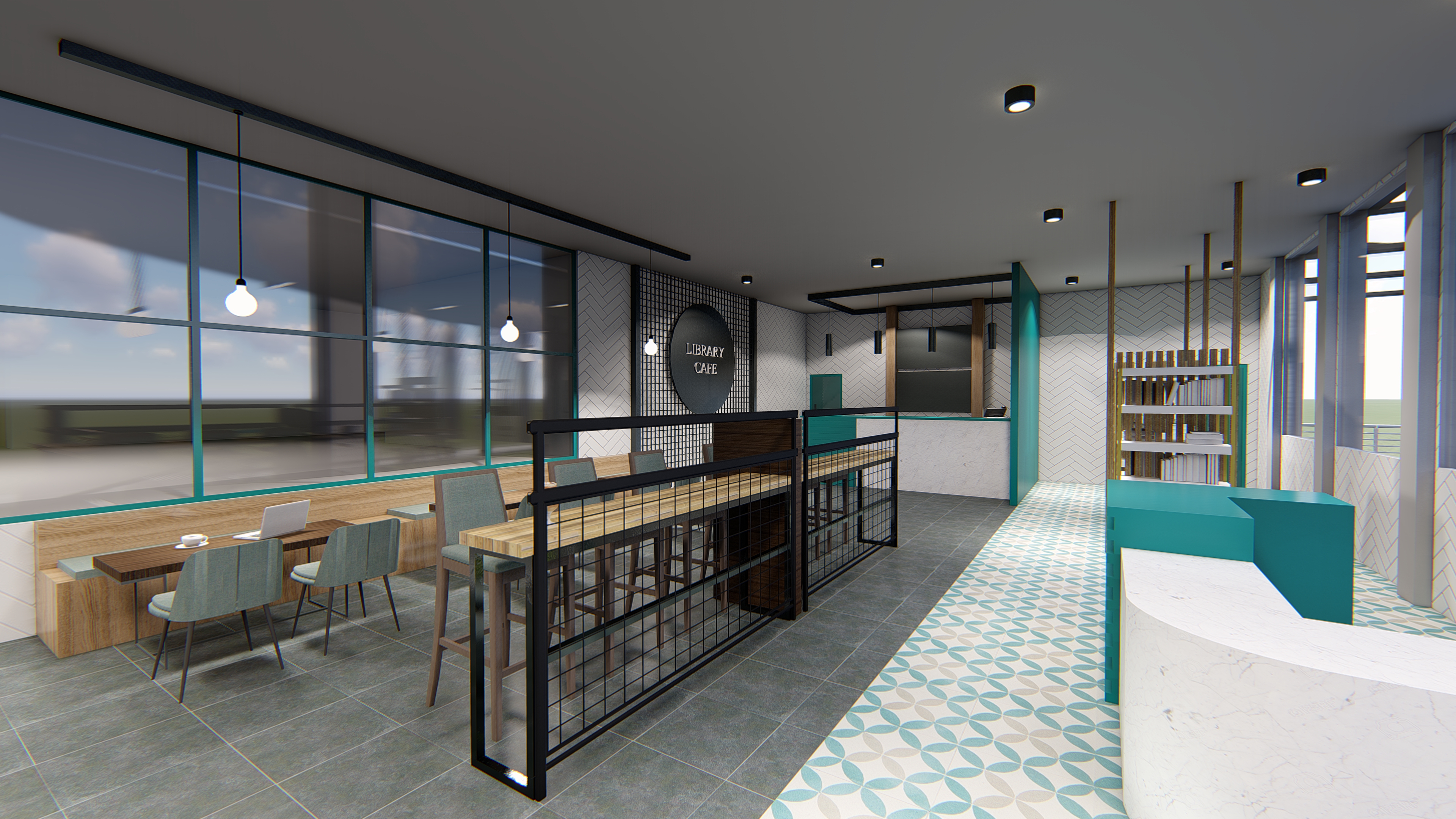 ﻿The Kids' Corner and Library Cafe at the Tutong Resource Center﻿

Eventhough I mostly came up with my own designs, I also did some researches on Printerest, and I was also inspired by the concept of navigation. I wanted the library to be an open space for the public to come and gain their knowledge, and I wanted to make it easier for the people to walk around and navigate through the areas. 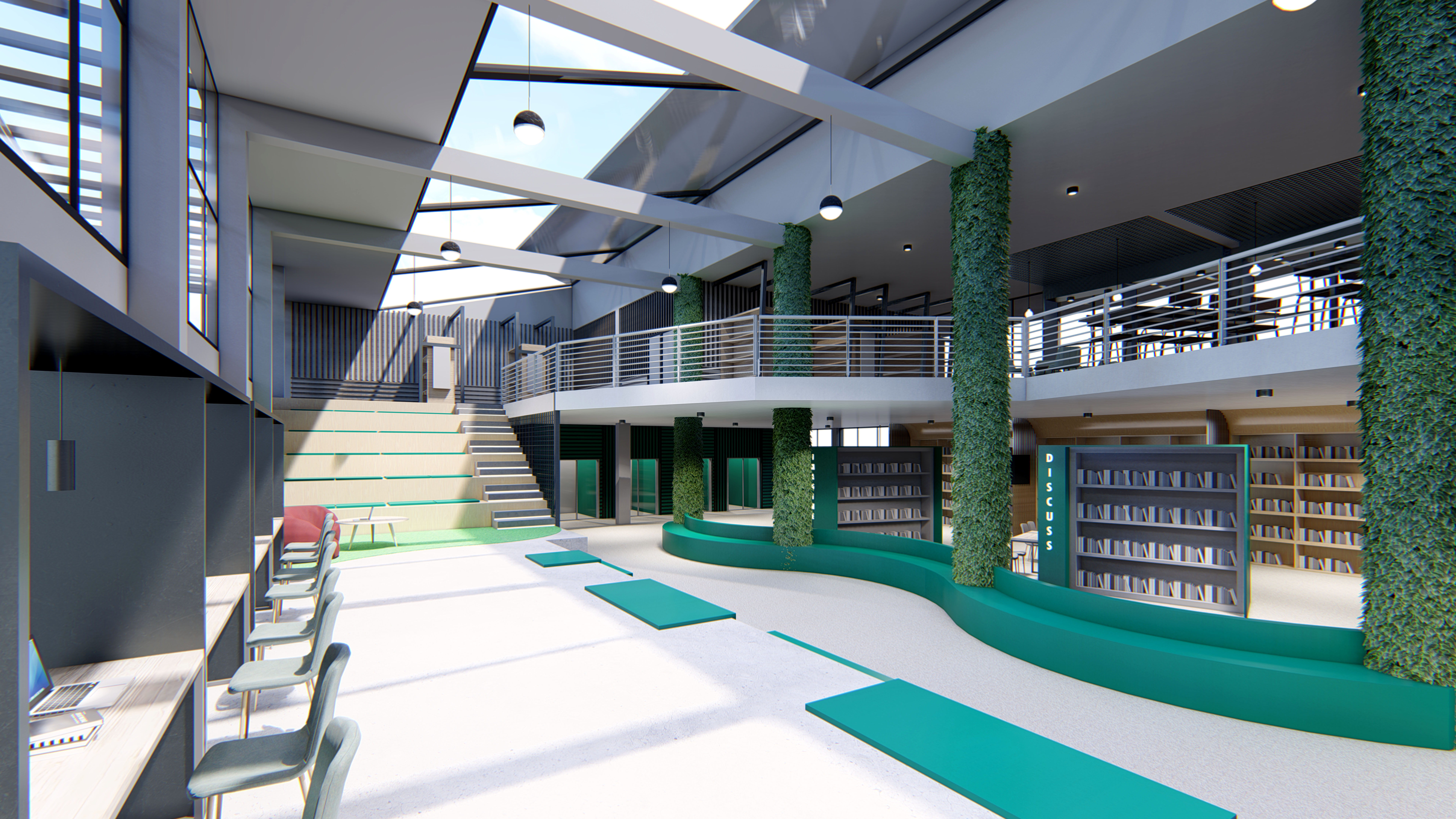 ﻿Siti Nurbayah's implementation of the concept of navigation allows for an open space, which enables the library visitors to easily find their way around the library﻿

Is there an architect or interior designer whose works inspired your Final Year Project?

Honestly, as I was designing my FYP, I wasn’t really thinking much about who inspired it. But throughout my journey, I have been inspired by the famous Zaha Hadid. She already passed away, but she is one of the world’s famous architects.

What made you decide to become an interior designer?

I just think that it’s very fun to create your own designs, and I’ve been into interior design for a long time. It has been five years since I started studying the subject. I’ve been in Politeknik for three years and before that, I was took interior design while studying in SVNR (Sekolah Vokasional Nakhoda Ragam) for two years.

Where do you hope to go after this?

I’m still giving it a 50/50 thought on continuing my studies at UTB (Universiti Teknologi Brunei). For now, I’d just like to rest from studying, so I prefer to look for a job at an architect firm.