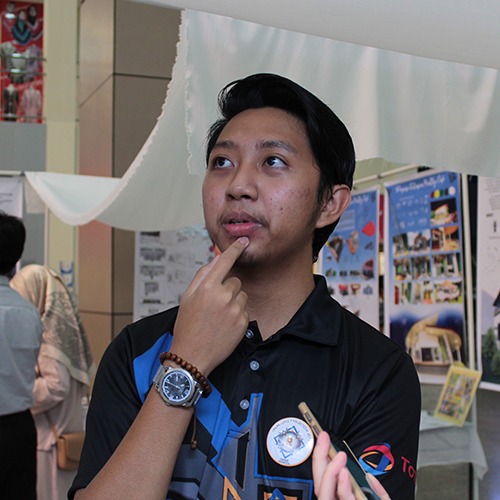 We conducted an interview with some of the participants, one of them was Muhammad Farid bin Haji Abdullah, a final year Interior Design student.

Tell us a bit about your Final Year Project.

For my Final Year Project I’m basically reviving the Tamu Berpayung Pasar Gadong. My concept for this renovation is the honeycomb, which is the shape of the site’s canopy roof. This canopy roof was already there originally, and I chose to maintain it, which is why I am still maintaining this concept and I tried develop more from it. I also chose the concept because I wanted to connect every parts of the site, so I implemented the structure of the honeycomb onto the walkways. I even incorporated it into my other designs such as the seating areas, and even the restaurants and its kitchen areas - The honeycomb basically connects everything together.

﻿Tamu Berpayung Pasar Gadong ﻿before renovation
Tamu Berpayung Pasar Gadong after renovation
Besides the landscape, there are also a lot of other facilities available. As I have mentioned, there is the restaurant - And I specifically wanted it to be a seafood restaurant because the place is close to the fish market, so the fish supplies can be easily transported to the site. There is also a fish spa - which of course, also requires fish, and hence, is also available at the site for the same reason. Other than that, we also have a garden center. Normally, people would only sell flowers at the nearby market on Fridays, so I wanted to move them here at the site, so they can sell the flowers every day.
﻿﻿
The seafood restaurant﻿
﻿The fish spa ﻿
The garden center
Why did you choose this site for your Final Year Project?

My client, the Jabatan Bandaran wants this place to be active again, so I tried to create more life in the area by renovating the site. I thought that more people would come here at night since the place is not hot, so there are areas, such as the garden center, which would look really great during nighttime.

Also, usually when people go to the Pasar Malam next door, they would go there and buy things, and sometimes they would take their time. Sometimes, there would be elderlies and kids waiting in the car, and they would get bored. So why not, while waiting, they could come over to this new site and enjoy the view and facilities here? There are also playgrounds at the site, so the children can just come and play.

In terms of tourism, although there are other recreational areas in Brunei - there is the Eco Corridor, the Rimba Garden Central - but this particular one will be located in the middle of the Gadong Area, and people can come here through various means of transportation. Aside from individuals cars, you can even come here by boat, or buses, so the place is easily accessible. And I know that tourists also like to go to the Pasar Malam, and they could come here as well since it’s also nearby the bus station.

What are the challenges that you had to face throughout the course of this project?

Well, I had to go through a lot of changes. Different people have different perspectives, so I had to incorporate the opinions of both my external and internal mentor into my design. My internal mentor wanted to have a walkway for cycling. Initially, I made the walkways look very simple - it was just one way so that people can go from one place to another. And at first I thought that the facilities were lacking, so my external mentor suggested a fish spa since you don’t have much of those in Brunei. Another challenge would be the limited time I had to complete this project.

What made you want to become an architect?

Where do you hope to go after this?

Not so sure about continuing my studies, but I might find a job. I don’t really have any particular place in mind at the moment.