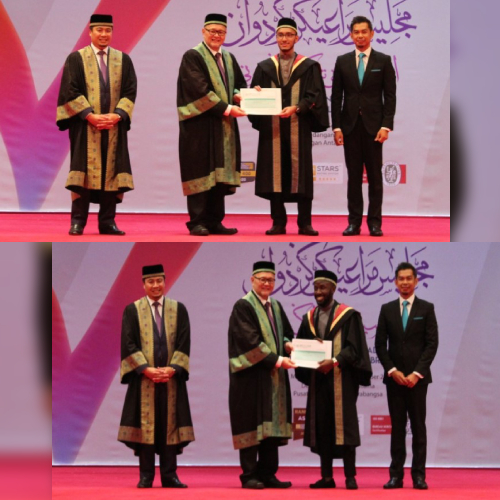 **This article was written and posted on the website's "Current Affairs" section on September 17, 2019

The event, which took place at the International Convention Centre (ICC), Berakas, was held in conjunction with the Universiti Teknologi Brunei (UTB) Convocation Ceremony 2019, to celebrate those who have successfully completed their studies and to recognise the graduates who have excelled in their academic programmes.

Attending as the Guest of Honour was the Minister of Education and Chairman of the UTB Council, Yang Berhormat Dato Seri Setia Awang Haji Hamzah bin Haji Sulaiman, who presented the awards to 30 graduates.

Delivering his welcoming speech at the ceremony, Awang Haji Ady Syarmin stated that the awards serve a form of recognition and appreciation from the university for the achievements and excellence of the graduates in their own respective fields.

The institute’s Acting Vice-Chancellor also expressed his hope that the achievements will further encourage and motivate the recipients, as well as other students, to enhance their efforts in attaining greater success.

Universiti Teknologi Brunei (UTB) is a leading Engineering and Technology institute in Brunei Darussalam that Specialises in the niche areas of Engineering, Business, Computing, Applied Sciences and Mathematics as well as design.

Established in 1986 as “Institut Teknologi Brunei (ITB)”, UTB was initially intended to offer Higher National Diploma programmes in Engineering, Business and Computing, before being upgraded  into a university in 2008 and renamed as “Universiti Teknologi Brunei (UTB)” on 1st March, 2016.

Since its upgrade, the university has made tremendous developments, including the expansion of its academic programmes portfolio, the establishment of its partnerships with industries and other universities, its programme accreditation by professional bodies, as well as their intensification of research activities.

Recently, UTB has achieved another milestone of achieving the 379th position in the Quacquarelli Symonds World University Ranking (QSWUR), against 1,620 other institutions from 82 countries around the world. The 2019 QS Asia University Rankings, on the other hand, has listed UTB among the top 200 universities across the continent. On top of that, the institute is the only University in the country, at the moment, to have received a Five Star Rating by the QS Rating, and the first university in Brunei to have successfully acquired ISO 9001:2015 Quality Management System Certification by Bureau Veritas.

﻿UTB graduates at the Convocation Ceremony 2019﻿