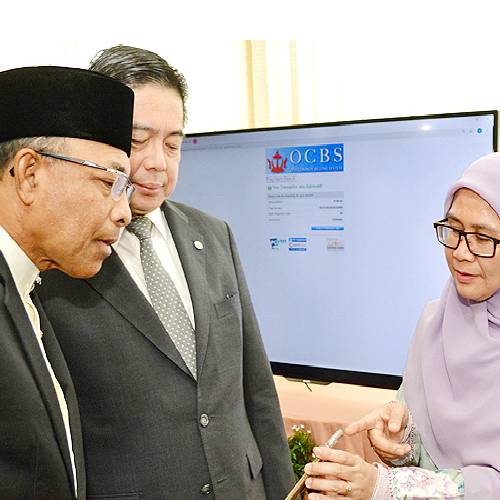 One Common Billing System (OCBS) introduced by Ministry of Development

Housing bills can now be conveniently paid via online through the One Common Billing System (OCBS) and is available for use for all members of the public. The new system was launched on the 27th February 2020 at the Housing Development Department at the Ministry of Development.﻿﻿

OCBS will enable members of the public to pay their housing bills via One Common Billing System (OCBS) portal and Internet banking where the receipt will subsequently be emailed and/or texted to the owner and payer.

The new system will help the Housing Development Department to monitor the outstanding bills by producing a complete and accurate report in addition to ease the claims of outstanding bills.

Haji Shaharuddin Khairul bin Haji Anuar, Acting Director of Housing Development, said the launching of OCBS gives an opportunity for the Housing Development Department as the first in the government sector to implement the system to better serve the public.

Hajah Chairani binti Haji Sulaiman, the Acting Accountant General of the Treasury Department said the introduction of the system is in line with Brunei’s transition to the 4.0 Industrial Revolution. The system was developed by the Treasury Department and is a graded system of the ePayment gateway for government agencies that still do not have billing or revenue collection system.

OCBS will be launched in phases where the first stage is in collaboration with the Housing Development Department and then will be implemented in several other departments. More information on OCBS can be found on www.mofe.gov.bn